Brady joined the Little M clan just after we moved in. Back then he was a very nervous two year old rescue German Shepherd. He is now a little less nervous eight year old German Shepherd. A very lovable, talkative rogue, who just wants to play, go on adventures and make sure the pack sticks together… Which is pretty much our priorities too!

He may seem really big when you first meet him, but after a while you’ll realise… he is really quite big lol ;o), but a lovely big guy that really thinks he’s human.

Being rescue, we don’t know much about his past, it’s hard to imagine what he went through before finding his forever home at Little M. What we do know is he loves people, but can be pretty scared around other dogs – yes, really.

Tux is also a rescue, and she came to us two years after Brady, from Spain. She is a black Belgium Shepherd and now also close to eight years old. They are chalk and cheese. She is very cute, a timid when she first meets new people but soon warms to you.

It was interesting, and tough, when they first met, but after 36 hours you could tell they were going to get on. Now they won’t go very far without each other… unless one is being naughty and then the other comes by and pretends to be as good as gold… then you know!

Oh, also… Tux is also very much in charge.

Don’t take our word for it, come and meet them for yourself! We have had so many people over the years tell us horror stories about being bitten as a child and then 10 mins after meeting our two they want to take them home.

But that said if you are nervous around dogs this can easily be accommodated as the guest areas can be kept dog free. 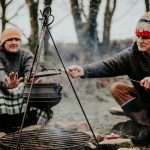